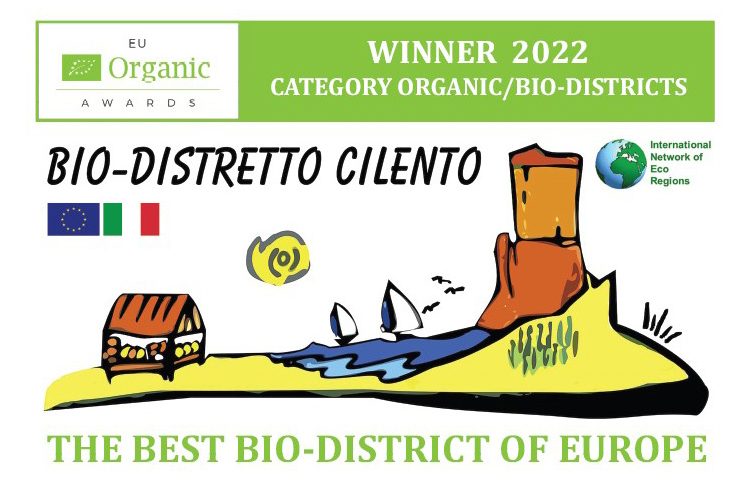 THE EUROPEAN UNION AWARDS THE CILENTO BIO-DISTRICT AND THE INTERNATIONAL NETWORK OF ECO REGIONS IN.N.E.R.

23 September corresponds to the autumn equinox and coincides with the “organic day”, established in 2021 by the European Commission, which this year also promoted the award for the best organic realities. A specific section of the ‘EU Organic Awards’ was dedicated to Bio-Districts.

On the podium at the awards ceremony in Brussels were three Bio-Districts, all members of the International Network of Bio-Districts IN.N.E.R.: the Cilento Bio-District, the Portuguese one of Idanha a Nova and the French one of Biovallée.  So we can say that the first real winner was the IN.N.E.R. network!

The 2022 prize was awarded in the prestigious headquarters of the European Commission, to the Bio-District Cilento, represented by President Emilio Buonomo, who, in declaring himself proud of the prestigious award received after 18 years of activity, emphasised that he considered it an award for all the Bio-Districts of the international network.

It was no coincidence that accompanying President Buonomo to Brussels was the mayor of Idanha a Nova (Portugal) Armindo Jacinto who, together with the Cilento Bio-District, promoted in 2018 the constitution of the first Portuguese Bio-District of the IN.N.E.R. Network, also among the finalists of the EU Organic Awards 2022. Mayor Jacinto travelled to Brussels together with President Buonomo from Cilento where, from 19 to 22 September, a Portuguese delegation of more than forty mayors, ministerial officials, academics and delegates from local development associations visited the Bio-District.

Bio-districts are territories where sustainability is at home, thanks to a ‘pact of work and solidarity’ between institutions, citizens, operators in the productive sectors, cultural bodies and associations, and the world of training and education. The sustainability of Bio-districts or Eco-regions concerns the environmental, social and economic spheres.

There are currently 66 Bio-Districts in Europe, mainly in Italy, Portugal, France, Austria and Spain, but many other territories have decided to adopt this innovative model of sustainable development.

By 2023 the number of Bio-Districts is destined to grow exponentially, in fact the European Commission has decided in the European Action Plan for Organic Farming to focus decisively on this model to achieve the objectives of the Farm to Fork strategy. The IN.N.E.R. Association is ready to support all the territories that will decide to start a Bio-District, providing them with the experience gained and the many tools developed (Tool Kit, Guidelines, monitoring tools).