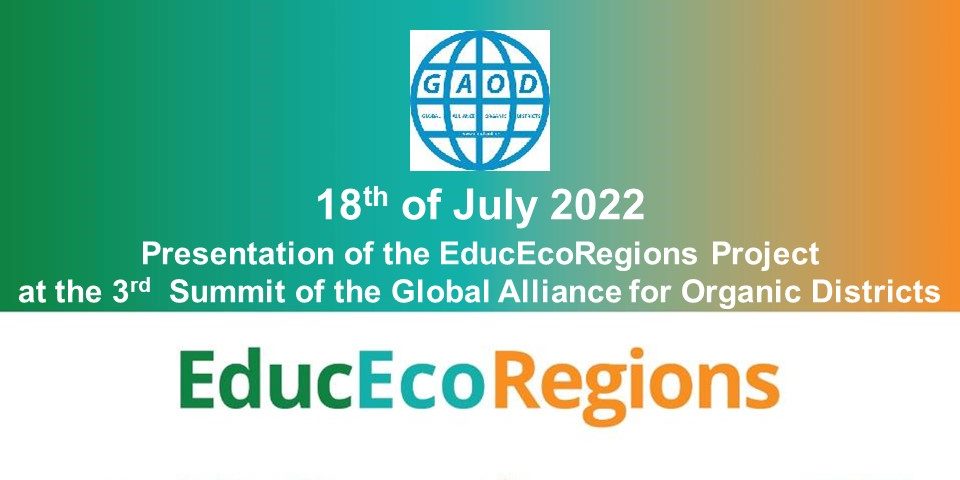 On 18 July 2022, the results of the Erasmus+ EducEcoRegions project were presented to an audience of 100 international delegates from 21 countries of Asia, Europe, Australia, the Pacific and Africa.

Salvatore Basile, project coordinator, moderated the session 3 of the World Summit, entirely dedicated to the Organic Districts. He introduced the speakers, who are the representatives of the 4 project’s partners: Bio-District Cilento and Association IN.N.E.R. (associate partner) for Italy, Agrobio for Portugal, SEAE for Spain, Bergerie Nationale for France (represented here by BioVallèè, the first French bio-district, where the training of trainers in France was organised, among other things). Among the speakers was also invited the Director General of the Department of Organic Agriculture of the Ministry of Agriculture of Tunisia, a country that will host the next World Organic Congress in 2024, where the products of the EducEcoRegions project can be further disseminated and proposed to support the launch of new organic-district experiences in new countries.

Salvatore Basile presented the results of the EducEcoRegions Project, focusing in particular on the Report on European Organic-Districts, the guidelines for the establishment and management of organic-districts, and the book (products developed with the coordination of the Cilento Bio-District).

The project’s products presented by the partners are:

This is the detailed programme of the session:

14:30 – Samia Maamer, Tunisia, (Ministry of Agriculture), The “Bioterritories” in Tunisia, presentation of the OWC 2024

Prof. Zanasi’s introductory speech illustrated the Tool Kit for the establishment and integrated management of organic districts, updated in the framework of the EducEcoRegions Project activities, the monitoring tool and the graphical representation of the performance of the organic districts. In particular, the results of the monitoring carried out in the Cilento Bio-District in Italy were shown.

Samia Maamer of the Tunisian Ministry of Agriculture, spoke about the inclusion of the BioTerritoires in the Vision 2030 and in the strategy for the development of organic farming and bio-tourism. There are currently 5 BioTerritoires and they correspond to the 5 existing bioclimatic zones in Tunisia: Sejnene à Bizerte, Haouaria à Nabeul, Kesra à Siliana, Majel Bel Abbes à Kasserine, Hazoua à Tozeur.

Claude Boudeille e Sandie Laurent-Peirin of BioVallèe, representing the Bergerie Nationale, responsible for the production of the EducEcoRegions Film, showed potential French organic districts, based on the experience of the Territories of Food (PAT) projects. This was followed by a detailed description of BioVallèe, where among other things the French part of the EducEcoRegions film was shot.

Aina Calafat Rogers della SEAE, responsible for the development of the e-learning platform of the EducEcoRegions project, presented the delivery of the distance learning and the course on organic districts. Also presented were the organic districts (Ecoterritorios) are being created in Spain: Alicante, Mallorca and Malaga.