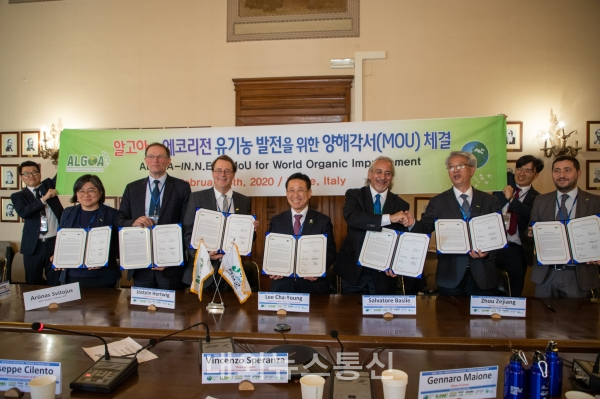 The day 6 of February 2020 the ALGOA network, representing the 240 Asian Governments in 16 countries and IN.N.E.R, the International Network of Bio-districts and Eco-Regions, which implements and disseminates the territorial development of territories upon their biological vocation where 40 bio-districts are already operational in Italy and abroad.

They attended the meeting at the MIPAAF in Rome where they signed an agreement of understanding to express a convergence of interests on the implementation of a new form of governance where, starting from organic, rural territories can become attractive, inclusive, and economically developed.

The participants indicate a common line of action on the strengthening and implementation of a global and dynamic organic food system.

Under the patronage of Minister of Agriculture and Minister of Environment about 30 people participated to the event to share practical ideas and discuss future cooperation.

Also some representatives of the Bio-districts of the Lazio Region attended the international meeting besides the Asian delegation representing Goesan County, the first Asian biological hub born in South Korea, the Municipality and the Department of Agricultural Policies, and the local press, IFOAM Asia; a European delegation composed by members of the INNER network, a delegation of few mayors of the first Bio-district established in Italy, in Cilento (in 2004), IFOAM EU, BERAS international and Organic Food System Programme, the National Council for Research in Agriculture CREA, and the Baltic Foundation of Lithuania.

The two signing networks have the support of IFOAM international, IFOAM Asia, IFOAM EU, the Baltic Foundation of Lithuania and OFSP, as they all base their actions on the principles of organic health, ecology, fairness and care of people and their territories, to contribute through shared working models and territorial living laboratories to the process of transformation of sustainable food systems.

They aim to contribute to the achievement of SDGs through the construction of bottom-up governance and participatory processes for the definition and progressive construction of sustainable food systems that starting from organic territorial practices are able to listen to local stakeholders (in a process of mutual learning), build a common ground for discussion, comparison and development with local adaptation, link and cooperate between scientific community and the practical territorial experiences.

Many of the municipalities of the Algoa network in Asia and IN.N.E.R live in agricultural areas that, having functional continuity, tangible and intangible, with their neighboring cities, represent a cultural heritage, landscape and biodiversity, fundamental for the sustainability of living and vital ecosystems, which need to be integrated and enhanced.

The objective of the Mou is to join the efforts of all the actors that operate to transform the territories into the protagonists of a future scenario of sustainable agroecological development, spreading food territorial innovations, methodologies and organized systems to cope with the major challenges of health, food and nutrition security, climate change and loss of biodiversity.

The joint statement is to be proposed in Sept 2020 at Rennes at the World organic congress and then proposed as enlargement for cooperation with other local governments of the world (Africa, Americas, and countries in Oceania and the PICT (Pacific Islander Countries and Territories).

Concrete examples of issues to be dealt with therefore are:

The agreement of today represents a response to the centralism of large cities and an opportunity for small and medium-sized towns and rural areas to be key players in building their own sustainable agri-food systems, capable of enhancing all the different socio-ecological and cultural identities.